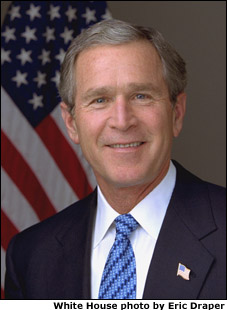 Takk fyrir.
Bush: “our Nation - this generation - will lift a dark threat of violence from our people and our future. We will rally the world to this cause by our efforts,
by our courage. We will not tire, we will not falter, and we will not fail.”
Snoother fyrir 18 árum, 3 mánuðum

Past work experience:
· Ran for congress and lost.
· Produced a Hollywood slasher B movie.
· Bought an oil company, but couldn't find any oil in Texas, company went bankrupt shortly after I sold all my stock.
· Bought the Texas Rangers baseball team in a sweetheart deal that took land using tax-payer money. Biggest move: Traded Sammy Sosa to the Chicago White Sox.
· With fathers help (and his name) was elected Governor of Texas.

Accomplishments: Changed pollution laws for power and oil companies and made Texas the most polluted state in the Union. Replaced Los Angeles with Houston as the most smog ridden city in America. Cut taxes and bankrupted the Texas government to the tune of billions in borrowed money. Set record for most executions by any Governor in American history.
· Became president after losing the popular vote by over 500,000 votes, with the help of my fathers appointments to the Supreme Court.