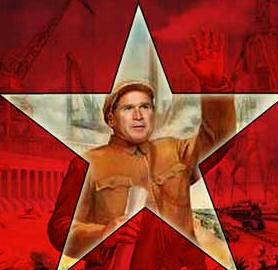 Backs employer efforts to use taxpayer money for anti-union campaigns

Proposes rule to end overtime pay for millions of workers

Proposed rules that would cut children's access to school lunches

Submitted a budget that's big on tax breaks for the wealthy, short on relief for working families

Attempts to restrict emergency room visits for the poor

Sides with drug companies against seniors

Offered a welfare reform plan that penalizes the poor, ignores immigrants and is underfunded

Banned mechanics at United Airlines from exercising their right to strike


***************************************
Charged Department of Health and Human Services for event expenses coinciding with campaign and fund-raising stops
***************************************
The Bush administration has charged the Department of Health and Human Services (HHS) more than $252,000 for HHS events attended by President George W. Bush that coincided with Bush’s attendance at same-day rallies and campaign fund-raisers and for Republican candidates across the country, according to a report from the U.S. General Accounting Office (GAO). Some $235,000 was charged to the Office of Administration for Children and Families, which runs the federal welfare program, Temporary Aid to Needy Families (TANF). The other HHS offices charged were the Centers for Medicare & Medicaid Services and the Office of Public Health and Science. The GAO report shows Bush attended 15 HHS events, with each covered by a memorandum of agreement (MOA) between the White House and HHS regarding the amount Bush could charge to the department. As of May 2003, the Bush administration had collected $252,372 from HHS for eight of the events. According to the report, there is often a lag time between an event and the White House billing and the remaining seven events could cost HHS another $217,000. The events occurred between February 2002 and January 2003. In comparison, the GAO report found that former President Bill Clinton attended 37 HHS events between April 21, 1997, and Sept. 29, 2000, and HHS was charged just $101,000.


***************************************
Backs cutting $270 million and 84,000 students from college grant program
***************************************
The Bush administration’s Department of Education approved changes in the formula families use to determine if their college-bound students are eligible for financial assistance under the Federal Pell Grant Program. The changes, announced May 30, will rob 84,000 of aid and reduce financial help to hundreds of thousands of other students beginning in the 2004–2005 academic year, according to a memo from the Congressional Research Service. Education experts predict the impact of the changes will ripple into many state and university administered aid programs that base their eligibility formulas on the federal model, denying educational opportunity to even more students.

***************************************
Proposed cutting school funds for military
***************************************
At the same time he is relying on American troops to fight a war in Iraq, President Bush is proposing to cut education funding for children in military families, according to news reports in late February. In his fiscal year 2004 budget request, Bush cuts federal impact aid funding—a federal program established in 1950 to compensate school districts for the property tax income they lose when tax-exempt property (such as military bases) are within their boundaries. Ending the $125 million program would affect 900,000 children, and officials of several school districts have said they would have to cut staff and defer needed building repairs. “I just can’t understand how, at a time when our military men and women are being deployed for a possible war with Iraq, this administration can turn its back on the children of our military personnel,” said John Forkenbrock, executive director of the National Association of Federally Impacted Schools.


************************************* **
Seeks to cut funding for poverty programs
***************************************
President Bush’s fiscal year 2004 budget released Feb. 3 cuts funding for some poverty programs, relaxes federal rules that states must abide by for some and restricts eligibility for others. The Washington Post reported that some of the affected programs include housing subsidies, unemployment benefits, health insurance, Head Start and the Earned Income Tax Credit (EITC). For example, the Bush budget proposes forcing parents receiving Temporary Assistance to Needy Families to work more hours (40) than already required (30), yet reduces or freezes funding for programs that would help them successfully join the workforce, including child care, transportation assistance and job training. In February, the U.S. House of Representatives passed its welfare reform bill; like Bush’s plan, it did not include enough child care funding for families entering the workforce. While proposing to eliminate taxes on corporate dividends, the Bush budget seeks to make it harder for families to qualify for the EITC, which provides a tax credit to working poor families, and to make it harder for children of low-income families to qualify for reduced-price or free school meals. It also would relax federal rules on Medicaid and allow states to drop many persons now covered or reduce the amount of aid provided and increase patients’ costs.


Presiden t Bush proposed a fiscal year 2004 budget Feb. 3 loaded with tax breaks for the wealthy, but lacking real relief for working families, the unemployed and states, which are facing their worst economic crisis in a half century. Bush’s budget cuts spending on workplace safety, low-income housing and aid to rural schools. It does nothing to create new jobs, rebuild and modernize schools, improve the nation’s transportation and transit infrastructure, build and refurbish the nation’s drinking and wastewater systems or patch the holes in the nation’s homeland security framework. Bush’s budget offers no meaningful solutions to the nation’s health care crisis, nor does it provide any real help for seniors struggling to pay the soaring cost of prescription drugs. It does, however, create record deficits and provide huge tax cuts for the nation’s wealthiest taxpayers, especially through its elimination of taxes on corporate dividends and proposed creation of several tax-free savings accounts that will shelter income for the wealthy.

***************************************
Will block funds to monitor health of World Trade Center rescue and recovery workers and money for firefighters
***************************************
President Bush said Aug. 13 he will not release the $5.1 billion Congress approved for supplemental homeland security programs. Those funds include $90 million to monitor the health of workers who cleaned up the rubble at Ground Zero, as well as $150 million for equipment and training grants requested by some of the nation’s 18,000 fire departments and $100 million to improve the communications systems for firefighters, police officers and other emergency personnel.
Bush’s action prompted the Fire Fighters to launch a campaign to lobby Congress to include the money in the spending bills for the federal fiscal year that begins Oct. 1. IAFF President Harold Schaitberger also said he planned to write a letter of protest to Bush. Despite some reports, Schaitberger said the Fire Fighters will not boycott an Oct. 6 ceremony in Washington, D.C., where 343 firefighters who died responding to the Sept. 11 attacks will be honored along with 100 other firefighters who also died in the past year.
Included in the $5.1 billion homeland security spending measure is money to improve the communications systems of firefighters, police officers and other emergency personnel. The Sept. 11 rescue efforts were hindered by communications problems when the various agencies’ radios and other devices could not communicate with one another. Other items that Bush’s veto will kill include funds to increase and improve inspections of cargo containers at the nation’s ports, enhance the FBI’s counterterrorism technology and strengthen security around the nation’s food and water supply.

Djísús… jæja
eins og einhver sagði
Never argue with a idiot, first they drag ypu down to their level, then they beat you with experiment….

“Never argue with a idiot, first they drag ypu down to their level, then they beat you with experiment….”

“Why is arguing on the internet like being at the special olympics?
Because it can be fun while you're there, but at the end of the day, the winner is still retarded.”

Djísús… jæja
eins og einhver sagði
Never argue with a idiot, first they drag ypu down to their level, then they beat you with experiment….