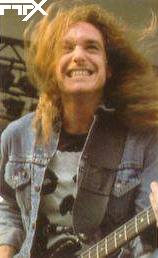 
It was approaching dawn on Saturday, the 27th of September, 1986. Metallica's two tour buses were making their way along a god-forsaken road that lies somewhere between the Scandinavian cities of Stockholm and Copenhagen. Apart from these vehicles, the route was deserted - there was no one else travelling at that unearthly hour of the morning. Suddenly, for no apparent reason, just before 6:15 a.m., one of the coaches swerved violently to its right and started careening wildly down the wrong side of the road. It was out of control, and a crash was inevitable.
The bus' brief, but horrific, excursion came to a halt some 60 feet further up the tarmac. By this time, the vehicle was on its side and lying in a ditch by the side of the road, near the small Swedish town of Ljungby.

During the unavoidable confusion that followed, the vast majority of the overturned bus' passengers managed to scramble free of the wreckage. Those that emerged included three of the four members of the band. In all honesty, the survivors had been extremely lucky, as they had all somehow managed to escape with little more than minor injuries and shock.

Swedish police arriving on the scene of the crash immediately arrested the driver as a matter of routine, but later released him without charges after further investigation revealed that the cause of the crash was black ice on a nasty bend in the road.

Unfortunately, however, there had been one fatality in the accident…… what is more, the deceased individual turned out to be one of the group. So, tragically, in the short space of those few dreadful seconds on that lonely Swedish road, Metallica's dreamlike existence was suddenly transformed into a hellish nightmare. Their 24 year old bass player, Cliff Burton, was dead.

“I saw the bus lying right on him. I saw his legs sticking out. I freaked. The bus driver, I recall, was trying to yank the blanket out from under him to use for other people. I just went, ‘Don’t fucking do that!' I already wanted to kill the guy. I don't know if he was drunk or if he hit some ice. All I knew was, he was driving and Cliff wasn't alive anymore.” James Hetfield -1993

Cliff burton RIP
“The essence of Revelation lies in the fact that it is the direct speech of god to man”
Fyrra álit
0
solvithor fyrir 15 árum, 8 mánuðum