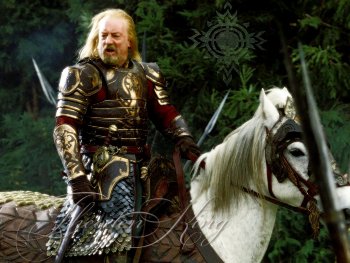 “Where is the horse and the rider. Where is the horn that was blowing. They have passed like rain on the mountains. Like wind in the meadow. The days have gone down in the west. Behind the hills, into shadow. How did it come to this.”

I know. It's all wrong. By rights we shouldn't even be here. But we are. It's like in the great stories, Mister Frodo. The ones that really mattered. Full of darkness and danger they were. And sometimes you didn't want to know the end. Because how could the end be happy. How could the world go back to the way it was when so much bad had happened. But in the end, it's only a passing thing, this shadow. Even darkness must pass. A new day will come. And when the sun shines it will shine out the clearer. Those were the stories that stayed with you. That meant something. Even if you were too small to understand why. But I think, Mister Frodo, I do understand. I know now. Folk in those stories had lots of chances of turning back only they didn't. Because they were holding on to something.” Frodo: “What are we holding on to, Sam?” Sam: “That there's some good in this world, Mister Frodo. And it's worth fighting for.”

“Yes, the White Tree of Gondor, the tree of the King. Lord Denethor however is not the king. He is a steward only. A caretaker of the throne. A thousand years this city has stood. Now, at the whim of a madman it will fall. The White Tree, the tree of the king, will never bloom again.” ”Pippin: “Why are they still guarding it?” Gandalf: “They guard it because they have hope. A faint and fading hope that one day it will flower. A King will come, and this city will be as it once was, before it fell into decay. The old wisdom bourne out of the west was forsaken. Kings made tombs more splendid than the houses of the living, and counted the old names of their descent dearer than the names of their sons. Childless lords sat in aged halls musing on heraldry, or in high cold towers asking questions of the stars.
And so the people of Gondor fell into run. The line of kings failed. The white tree withered. The rule of Gondor was given over to lesser men.”

Aragorn: “You fell!” Gandalf: "Through fire. And water. From the lowest dungeon to the highest peak, I fought him, the Balrog of Morgoth. Until at last, I threw down my enemy and smote his ruin upon the mountainside. Darkness took me. And I strayed out of thought and time. Stars wheeled overhead, and every day was as long as the life age of the earth. But it was not the end. I felt light in me again. I've been sent back until my task is done.
“You can go with the flow”
[Notanda eytt] fyrir 14 árum, 4 mánuðum

Bilbo: “Hobbits have been living and farming in the four Farthings of the Shire for many hundreds of years, quite content to ignore and be ignored by the world of the Big Folk. Middle-earth being, after all, full of strange creatures beyond count, Hobbits must seem of little importance, being neither renowned as great warriors nor counted among the very wise… In fact, it has been remarked by some that Hobbits' only real passion is for food. A rather unfair observation, as we have also developed a keen interest in the brewing of ales and the smoking of pipe-weed. But where our hearts truly lie is in peace and quiet and good, tilled earth. For all hobbits share a love for things that grow. And, yes, no doubt to others, our ways seem quaint. But today of all days, it is brought home to me: It is no bad thing to celebrate a simple life.”


Théoden: “Gríma, you need not follow him. You were not always as you are now. You were once a man of Rohan! Come down.”
Saruman: “A man of Rohan? What is the house of Rohan but a thatched barn
where brigands drink in the reek and rats roll on the floor with the dogs?
Victory at helms deep does not belong to you, Théoden, horsemaster!
You are a lesser son of greater sires.”

Elrond: "If Sauron is defeated, and Aragorn made king and all that you hoped for comes true, you will still have to taste the bitterness of mortality.
Whether by the sword or the slow decay of time, Aragorn will die. And there will be no comfort for you. No comfort to ease the pain of his passing.
He will come to death. An image of the splendor of the kings of men in glory, undimmed before the breaking of the world.
But you, my daughter, you will linger on in darkness and in doubt. As night falling winter has come without a star.
Here you will dwell, bound to you grief, under the fading trees, until all the world has changed and the long years of your life are utterly spent.
Arwen…. there is nothing for you here, only death.
Fyrra álit
0
Dannatello fyrir 14 árum, 4 mánuðum

Aragorn: Hold your ground, hold your ground! Sons of Gondor, of Rohan, my brothers! I see in your eyes the same fear that would take the heart of me. A day may come when the courage of men fails, when we forsake our friends and break all bonds of fellowship, but it is not this day. An hour of woes and shattered shields, when the age of men comes crashing down! But it is not this day! This day we fight! By all that you hold dear on this good Earth, I bid you *stand, Men of the West!*