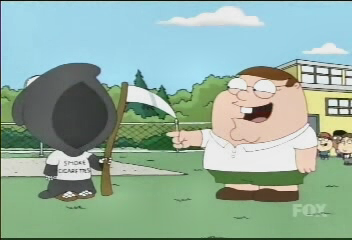 Little Diane: Tom, you're so far in the closet, you're finding Christmas presents.

Peter: Hey, is the Count a Vampire?
Brian: What's that?
Peter: Well he's got these big fangs. Have they ever shown him doin' somebody in and then feedin' on em?
Brian: You're, you're asking me if they've ever done a Seseme Street in which the Count kills somebody and then sucks their blood for sustenance
Peter: Yeah
Brian: No, they've never done that.

Doctor: Mayor West you have Lymphoma.
Mayor: Oh My.
Doctor: Probably from rolling around in that Toxic waste. What in God's name were you trying to prove?
Mayor: I was trying to gain super powers.
Doctor: Well that's just silly.
Mayor: Silly yes… Idiotic… yes.

Brian: Hey d'you bring enough breasts for the rest of the class?

Little Peter: My God! Not only are ghosts real, but their innards are made of Children
Heimir88 fyrir 15 árum, 11 mánuðum