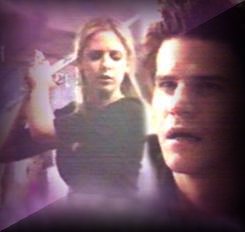 
astral projection - the theory that while one sleeps one has another body – an astral body – that can travel through time and space.

feeding - Drinking blood; a vampire's only means for survival.

harvest - a night once in a century when a Master Vampire can draw power from one of his minions while it feeds.

host - The person off whom the vampire feeds.

master - The most powerful of vampires, capable of destroying the earth.

minion - a follower of the Master Vampire.

slayer - a girl born once every generation with the strength and skill to hunt vampires, find them where they gather and stop the spread of their evil and the swell of their numbers.

vampire - Demonic creatures who live off the blood of humans; a vampire appears to be a normal person until the feed is upon them – only then do they reveal their true demonic visage.

vessel - a minion, bearing a three-pointed symbol, which can give the Master Vampire power by feeding.

watcher - person who finds the Slayer and leads her on her path; it is his destiny to guide the Slayer.
“Napoleon is always right!” -Boxer
dobermann fyrir 20 árum