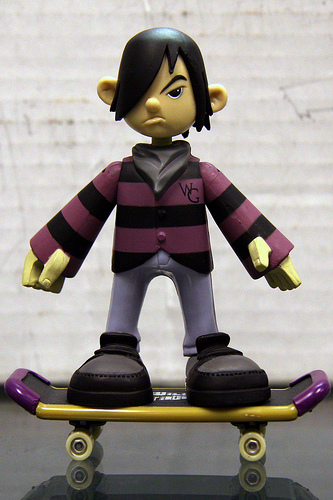 Rob Dyrdek's creation of off brand Tech-deck action figure box reads:
Emo Cry's parents moved to Ketterville from china when he was a baby. Growing up as an outsider, Emo Crys turned to drawing as a way to express his emotions. Once he found skating, he approached it the same way. It is all art to him. Emo Crys met Lil Rob at the local skate contest. They slammed into eachother and spent the rest of the day trying to knock eachother off their boards. After the contest they apologized and Emo Crys became part of Lil Rob's skate crew, the Wild Grinders.

I agree my dear sir.
…This isn't where I parked my car?!!!
Fyrra álit
0
Frostið | Hjálp | Persónuverndarstefna | Notkunarskilmálar | Um Huga