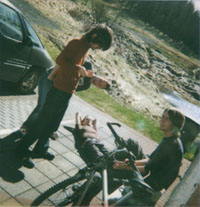 As your studio is perfectly distanced for a bicycle ride from my house, I was thinking I should ride my bike over to you and check what is happening with your new album and stuff, I said and added stupidly, like this was of any concern to Iceland's most famous male “pop star” ever: You see; I like to add a purpose to my bicycle rides.
– Oh sure, come on over. I'll give you some coffee, said Jonsi, being the modest genius he is, and added teasingly: But you will not get to hear any tracks.

The bicycle ride from the western section of Reykjavik to the Alafoss section of neighbour village Mosfellsbaer is 18 miles on paved bicycle roads along nice little fjords and valleys. The wilderness is always close by in Iceland so I get to see some newly arrived migratory birds, including the surprisingly big spoi (Numenius phaeopus), the red beaked tjaldur (Haematopus ostralegus), the popular heidloa (Pluvialis apricaria) and the fucking hostile kria (Sterna paradisaea). There are even some golfers to be seen along the way and a fat seal chilling on a reef. Of course the weather is worse than I thought – as often is the case here – and the wind is straight to my face all the time as it seems to blow from all directions at once – as often is the case here too. So it's not until two hours later that I'm outside Sigur Ros studio, the converted swimming pool, dripping with sweat and with an aching ass.

Sigur Ros engineer/co-producer, englishman Ken Thomas, is on his mobile phone by the front door and Jonsi and Kjartan are down in the main recording space, the ex-pool, plugging Kjartan's Gibson guitar into his Vox AC-30 amplifier. To my surprise they use a lot of old Boss-effect pedals which I thought only kids in garage bands use. Of course they take all the time in the world to set up the gear but finally I can coax them up to the kitchen/lounge (the ex-changing rooms of the ex-swimming pool) where their chic italian coffee maker is located. They both go into the procees of making us some hip café au lait and Kjartan jokingly acuses Jonsi of poisoning me with expired soja milk. The sink is full of dirty plates and cups and the whole place is a mess, really. They have framed the famous humble ass-licking letter from Metallica – in a cheap plastic frame – and it's tilted up on the wall along with some posters and stuff.

Some of you readers have been whining about that Steindor Andersen EP and asking if it's ever gonna be available again. I see a great money making opportunity in making it available and ask the boys if we should press up perhaps 1000 copies and sell it exclusively through this web page.
– You could take the profits and hire someone to clean out this place once a week, I kid them.
– Well, we already have someone who does that, they say.
– How about doing it for a good cause, like, maybe, for a “Sigur Ros fun funds”?, I say and they laugh.
– Nah, says Kjartan then: We want to do a decent album with Steindor one day. He was a bit out of tune on some tracks on that EP, had had one whiskey glass too many.
I give up and ask instead if they're gonna release the music from the Odin's Raven Magic thing.
– Well, we're recording the concert on the 24th (of May) and if it goes well we might release it, either as a CD or even a DVD, Jonsi says.

Now Georg, the bassist, pops up from out of nowhere. He has been toying with a new Macintosh computer downstairs but is on his mobile phone now. A bit later drummer Orri comes out from what I thought was a cupboard with a towel around his midsection and has wet hair. Sigur Ros' studio set-up has started to remind me of the seventies Barbapapa family – which no one probably knows so I will liken them to Santa Claus' elves instead. Here they have been holed away for ages, almost living full time in the studio and recording the follow up to Agaetis byrjun. It doesn't seem to have been an altogether happy process.
- Me and Ken have formed a club against music, says Jonsi, grins and adds: We're just so fucking bored with all music right now.
- So you haven't been listening to anything while recording the new album, I ask.
- No, not really, only Sigur Ros.
- Siggi Armann's Mindscape album is one of the few albums we can listen to, says Kjartan and Jonsi agrees: It is just so completely honest.
- Have you heard the new Mum album?, Jonsi asks me.
- Yes, don't you think it's great?, I ask back and he mum-bles something and smiles.
Now Ken has taken on the majestic task of doing the dishes.
– This was not in my work description, he jokes.

I finally come to the point: What's the new album gonna be like?, I ask.
– It's just those songs we have been playing at concerts for the last few years, Jonsi says.
– You mean “Popplagid” and “Daudalagid” and them all?
– Yes, exactly.
– Have you written any lyrics for those songs yet or are they just gonna be called “Popplagid” and so on? (“The pop-song”, “The death-song” - typical temporary names that bands use before they write lyrics)
This question has obviously been on Jonsi's mind and he says: Well, maybe the songs wont even have names.
– Have you named the album yet?
– Well, maybe there wont be a name for it. Do you have a name?
– Bah… Nah… But, how is the recording process coming along?
– We have recorded 8 or 9 songs. We have done the drums, the bass, my guitar and the strings. This time we took 2 weeks to record the strings, but we had to do them in 2 days last time. We used people from the Icelandic Symphony Orchestra when we did Ageatis byrjun and they had to have everything written out note by note. This time we used the girls that have been touring with us and just let them “jam” in the studio until everybody was happy. Say, how long do you like albums to be? 40 minutes? 75 minutes?
– In your case the longer is definately the better. Your songs are so long that only 3 or 4 songs would fit on a 40 minute Sigur Ros album.
– Hmm, yes, you're right.
– When is the album gonna be out – if you are as optimistic as possible?
– Well, we're kind of bored with making it so we want the album to come out ASAP, September - October 2002 even. What we have still to do is Kjartan's guitar and organ parts and then all vocals. We have a month to do all that as we have booked a studio in England to mix the album. We booked Peter Gabriel's Real World studio in Bath from the 15th of June.
– You gonna have some famous producer come in to mix?
– No, just Ken and us.
– So how do you think the album's gonna be, compared to Agaetis byrjun?
– I would say that the main difference is that this time the production will be less polished. The sound will be much more bare and alive. And far fewer little slick things and much less sweet stuff. I think playing the songs a lot at concerts and then recording them hasn't been a very thrilling experience for us. I think next time we'll record the songs as we make them. Try to keep them fresh for us.

It's pretty hot outside the studio, if you stay in the sun. The band poses for a picture with my bicycle but then Kjartan and Jonsi say bye and go down to the old pool again.
– You still hang around even if you've done your parts?, I ask Orri and Georg as I put on my bicycle helmet.
– Well, we like to keep an eye on Jonsi and Kjartan and prevent any nonsense from happening, they reply.
Then they start talking about renting a video and I suggest they see Jalla! Jalla! or Ghost World but they have seen both and liked them a lot. I thank them for the hospitality and can hear the beginning guitar riff of “Popplagid” as I petal away. The tones are soon drowned out by the howling icelandic summer breeze.