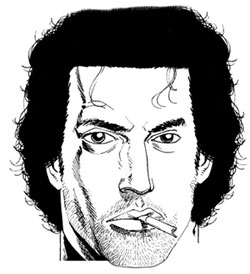 Written by Garth Ennis and drawn by Steve Dillon. Covers by Glenn Fabry.
The story was originally published in 66 issues each about 40 pages but was printed again
and the story was put into 9 books. Preacher has gotten great reviews even though it´s quite shocking and controversial.

To briefly explain the plot of the story it´s about a young minister, Jesse Custer, who all of a sudden gets the power of god at his fingertips. He incidently meets up with his old flame, Tulip and an irish vampire named Cassidy. We find out that the reason for Jesse’s power is that God has quit his job as the almighty. Jesse then goes on a roadtrip with Tulip and Cassidy to try and find the answers to his questions.

What do the characters in Preacher believe in and how do they confront their religion and what is the difference between them? To answer these question we must
look thoroughly through the story.

First of all there is the main character Jesse Custer, feeling like there is no real purpose in life and God is not listening to his prayers. He is not sure why he is working as a preacher. He has lost his faith more or less. His congregation can be compared to most other congregations in real life, folks claiming to be christian and thinking that they can save their souls and be good christians by going to church each sunday or at christmas.

When Jesse receives the power of god it makes him think that God is not as good as he thought. Jesse then makes a 180° turn and changes to a smoking & drinking roughneck.
He then sets out to find God and hold him responsible for his misdeeds.

His ex-girlfriend Tulip was never really much of a religious person but she tried to live a honest and a good life but was in shock after Jesse had left her and became a hit-woman.

Proinsias Cassidy, the Irish vampire. Born around 1896. His upbringing was not very religious but he was a honest man though. He was not always a vampire, he was walking home with his brother when a creature attacked him and made him what he is today.
After he changed, and became an immortal, he was, what God called him, an abomination. He was exiled from heaven and had to roam the earth until the day he died.

These three people then set out to find God, but there are many obstacles in their way and their past was catching up with them. Word got out to a special organization known as The Grail. Their headquarters located in France. They control the world more or less and have people from their organization often have powerful social status e.g. the president of the United States was one of their puppets.

Their purpose has been to protect the sacret bloodline of christ. They have let his discendants breed within their own. They were planning on making a false nuclear strike in 2000 and then bring forth the final descendant of Christ and he was supposed to be the new Messiah. Their oppinion of their religion was that they thought they were true believers and wanted to make a change in the world but their true purpose even if they themselves could not really see was to gain more power. One of their “employees” they had recently recruited, called Starr, was quite mad, he did not agree with The Grails policy. He wanted to “save the world from itself”. When he found out about Jesse he immediately thought “this is my Messiah and this is how I can take over the grail”. It seems to me that the grail is not certain what to do. The offspring that they guard so well, the last zion, so to speak, has of course been hugely affected by being inbred by its parents, who were in fact brother and sister. So.. The Grail wants to kill Jesse and Starr wants to exploit him. It is ironic how The Grail proclaiming to be the holiest of holy, tends to bend/break one or more of the ten commandments to make sure things stay like they want it. Later in the story when Jesse Finally meets God, God saved him when fell out of an 747 airplane over the nebraska desert. Jesse wanted to finally get some answers from God, why he ran away from his duties, why he created a world so grim and why he didn’t want Jesse after him. He never got an answer though.

To sum things up, the author has taken a very radical way in visualizing religion in the story
even though it is not clear at some times. Every single character seems to take a different approach to religion. They all know god exists but some decide to be on his side, others try to find him and hold him responsible and some even don’t care if he exists or not they’re just power hungry maniacs who want to rule the earth. This story really is quite shocking and has lot of violence in it. Still it draws you in and it makes you think about the great question, is there really God and what is he doing? It is strange how religion can make people do things
they normally would not do!

References: Preacher volume 1-9
1.Gone to Texas, 2.Until the end of the world, 3.Proud Americans, 4.Ancient history
5.Dixie Fried, 6.War in the sun, 7.Salvation, 8.All hell’s A-coming, 9.Alamo
Published by DC comics, Vertigo is a Trademark of DC comics.
www.dccomics.com

Hvar getur maður nálgast þessar myndasögur?
“Our enemies are innovative and resourceful, and so are we. They never stop thinking about new ways to harm our country and our people, and neither do we.”
Fyrra álit
0
Necc fyrir 16 árum, 2 mánuðum