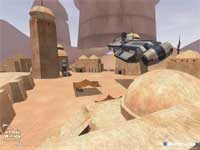 “Most Impressive.
The customization of character is incredible. I spent a half hour just tweaking the way the avatar looked.”

“There's not a lot that gets me genuinely excited.
But that was cool”

“I'm still a little disoriented from the non-inverted mouselook, but otherwise it was a nice start!
Got a good feel for the max targetable distance, and it appears to be more than enough. It'll be interesting to see how long-range combat will work out.”

“VERY LARGE!!! went out on a journey and before i knew it, I was way far off from the starting point. (a map or pointer back to spawn area would have helped). Grand canyons, massive mounts, and lots of people pukeing. what more can ya ask for.
First imprssion…Impressive…most impressive.”

“I'm speechless. When I can talk again, and not dribble like a fanboy, I'll have some constructive comments.
Incredible job even with the taste of what we've seen so far. Thanks for all the Dev's hard work.”

“Part I enjoyed the best was the character creation process, what else could I say but wow, I have never seen detail and flexibility like that before in any game, I could have literally created an image of myself.”

“That was jaw-droppingly cool.”

“Next.. stepping onto Tatooine. And looking at the format for playing.. and then seeing all the devs wandering around and them coming up to you to tell you they appreciate you being there.. and the emotes and the moods and holy moly.. it was just.. there is SOOOOOOOOOOO much you just can't assimilate it all in one swoop.
And… wow.. it was overcast. And there were rocks and mountains and sand and underbrush and the variety of characters!!! Jeepers!! I couldn't believe there were so many colors and outfits and different looks!!!
And the chat area!! I was so impressed about how when you move out of the area, you can only communicate with those within a certain area unless you shout or something!
What else impressed me is even though the game is immensely complicated it is relatively simple to use. There is just SO MUCH of it!”

“Words don't explain it. They don't. Wow. And when you get the game in there, well. Wow. I could almost cry. Almost. It's a Star Wars fans dream come true. Its really better than I could have imagined. Thanks.”

“The clothes on my avatar are stunning. The camouflage khaki and brown pants look like they came off a real clothes rack even including the balooning cargo pockets on the legs. My combat jacket has what looks like real buckles across the chest and loops on the shoulders that look functional for holding small ordinance.
The sky has no clouds but has a realistic haze, its not the crystal blue of an artificial sky. The landscape is most incredible. The ravines and gullys are very natural feeling, and the desert plants look almost perfectly real.
The map is truly Immense. I have run in a single direction for over an hour now and have not encountered an edge (though I am sure one exists somewhere)
I will tell you this, the DEVs have avatars so close to their real appearances that it almost looks like they scanned their pictures into the game.
Some of the vegetation sways in the breeze, it's so real that you almost don't see it because your so use to it in real life. The tumble weed looking brush looks sharp enough to cut you.
The mouse look becomes quite natural after about 20 minutes. The speed differences are also quite natural. The running figure looks right, the arms move just as a real persons do.”

“The overall experience was 100% more then i expected to get. so i guess i am still dumbfounded by the beauty, size, and detail of the planet.”

“The visit was far too short. Even with nothing to do it was incredible. Everything felt right. The look and feel was definitely Classic time period. I’m hungry for more, much more.”