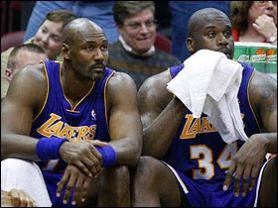 1. Shaq. Too obvious. There simply isn’t anyone in the NBA that has the type of impact on the game Shaq does. He alters and blocks shots defensively, and on the offensive end he’s an immovable, dunking machine inside. Who’s going to guard him, Ben Wallace? Big Ben has the impressive physique, but he gives up at least five inches and 80 pounds.

2. Kobe. Again, who defends him? Richard Hamilton is a nice offensive player, but if he’s forced to try and lock up Kobe, it’ll take away from Rip's offensive effectiveness. Kobe has yet to land a Finals MVP, so expect him to go all out to land one – and thus up his bargaining power with the Lakers this summer.

3. Experience. The Lakers have been here four times in the last five years. Who on the Pistons roster has Finals experience? Only Elden Campbell and Lindsey Hunter. Not that they’ll be in awe, but when the chips are down in the final minutes of a close game, who do you want taking the shot, Kobe Bryant or Chauncey Billups?

4. Point guard play. Some might give Billups the edge over Gary Payton because the man they used to call The Glove has had a mediocre playoffs. Not true. Payton is a savvy, experienced defender, and Billups is more one dimensional (he's nothing special with the dribble penetration) than Tony Parker and Sam Cassell.

5. The Mailman. What, you think Karl Malone, he of the akimbo elbows and knees, would get to the finals at age 40 and lose? Kobe and Shaq will slug it out for the MVP award, but I just don’t see Malone letting the Lakers lose this series – both as a leader, and a force inside. He’s the ideal physical defender for shutting down Rasheed Wallace or forcing him into losing his cool.

6. Defense. It’s going to be billed as a low-scoring series, where the first to score 90 points wins. However, the Lakers match up very favorably with Detroit. Devean George and Kobe Bryant will probably take turns on Hamilton, which should wear him down. Malone should have no problem shutting down Wallace, and I give Payton the edge over Billups.

7. The Zen Master. Many a critic will bemoan the fact Phil Jackson has won all of his titles courtesy of the best players of their respective eras – Michael Jordan, Shaq, and Kobe. But when it comes to postseason brilliance, how else to explain’s Jackson’s nearly impeccable record of closing out series? When Detroit goes on a 12-0 run and Jackson doesn’t use a time-out, it makes you smile because you know it’s all part of his plan.

8. The A-list factor. Wednesday night, ESPN panned the audience in Detroit for celebrities during Game 6. They came up with Joey Harrington of the Lions, and Kid Rock. L.A. counters with a bevy of one-name A-listers such as Leo, Jack, and Denzel, not to mention Spiderman.

9. Homecourt. The Pistons were able to steal two games in Indiana, but the Lakers have been unbeatable at the Staples Center this postseason. To pull off an upset in LA, Detroit will really need to show off some offensive firepower, which is unlikely. Who’s the third option – Corliss Williamson?

10. One last time. Much speculation has been made up what will happen to the Lakers after this season – will Kobe go, will Phil stay, will Payton return for one more year. Well if Kobe does bolt to the Suns (yeah, like he’d go to that non-market), and Phil retires (why?), then this would be the final Lakers hurrah, one last title to close out a half-decade of dominance. It would be a run equal to that of the 1990's Bulls, and the Celtics of old. With so much at stake, and this maybe being the final time such an awesome unit is assembled, expect the Lakers to band together and take out the Pistons in five games
Hoopshype 2. júní 2004
Fyrra álit
0
abargath fyrir 16 árum, 1 mánuði