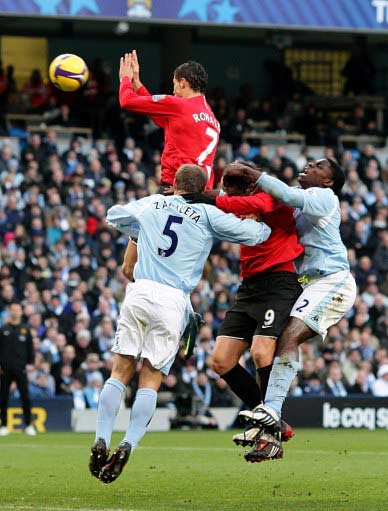 “He also thought he heard the whistle.

”It's not as if he's thrown a hand at the ball to deflect it away or punch it towards goal, it simply hit his hands.

“If it had been outside the box, the referee would just have given a free-kick, nothing else. The crowd played their part of course and he got sent off.”

“I Handballed Because Of Richards!”

Cristiano Ronaldo was sent off for a second yellow card at Wastelands on Sunday after deliberately handling the ball in the box. It was clear Ronaldo thought he had heard a whistle as he patted the ball down to the ground, rather than instinctively going for goal.

Howard Webb didn’t see it that way though and send Ronaldo off. FIFA rules state that a yellow card should only be handed out if the referee deems the player guilty of unsporting behaviour, for example, when a player deliberately and blatantly handles the ball to prevent an opponent gaining possession or attempts to score a goal by deliberately handling the ball. Clearly, Ronaldo was guilty of neither, yet Webb made the moronic decision to dish out a second yellow and send him packing.

Ronaldo has today cleared up his reason for handballing, explaining that he thought Micah Richards had been fouled. Fortunately, Ronaldo will only miss our Carling Cup game against Blackburn.

“Rooney took the corner, I jumped and that was when I heard a shout from Richards and simultaneously the sound of a whistle,” said Ronaldo. “I was convinced that the ref had blown for a foul. I stopped trying to head the ball and score a goal. I grabbed the ball so Richards could get help. It never entered my mind that the referee would show me another yellow card because, for me, I hadn’t done anything wrong. To the contrary, after Richards yelled I thought he was hurt and needed assistance.”