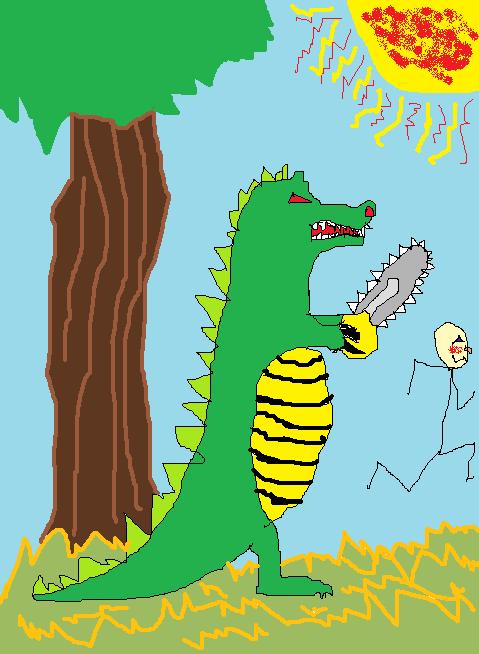 A 4.4-metre crocodile has chased a man up a tree in the Northern Territory while the man was cleaning-up debris left by cyclone Monica.

The owner of the Corroboree Park Tavern, Peter Shappert, says the man was trying to remove a tree that had fallen against the saltwater crocodile pen.

Mr Shappert says the crocodile, named Brutus, managed to take possession of the chainsaw the man was using.

“He's been a bit upset with the noise, so he's come shooting out of the pond, run up the tree and tried to grab Freddy the chainsaw man,” he said.

“So he's missed Freddy and grabbed his chainsaw instead … he's swimming around with a large steel chainsaw hanging out of his mouth.”

The clean-up effort was delayed while staff tried to win back the necessary machinery.

“I was going to drain the pen and then ask him politely to let go of the chainsaw,” Mr Shappert said.

Although staff have now retrieved the chainsaw, Mr Buckland says it has been written-off.

He says his relationship with the crocodile is also on the rocks.

“We're not seeing eye to eye at the moment,” he said.

Mr Buckland says Brutus lost a few teeth during the ordeal , but was otherwise unharmed.