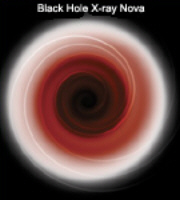 The first man that came up with the concept that a thing could be that massive that even light can not escape it was the English geologist John Michell.On this assumption, a Cambridge done, John Mitchell wrote a paper in 1793 in the Philosophical Transactions of the Royal Society of London in wich he pointed out that a star was sufficiently massive and compact would have such a strong gravitational field that light could not escape: any light emitted from the surface of the star would be dragged back by the star’s gravitational field before it got very far. In these early ages everyone considered that light was a massless wave that gravity did not affect
(The Wave Theory). Since this was the central idea of the time, John Mitchell’s theory did not get much attention. It was not until the greatest french scientist of the time, Pierre Simon-Laplace, promoted the earlier theory of John Mitchell, who had been dead for about hundred years, in the book Expection de systeme de monde.
In 1915 Einstein showed the world, with his General Theory of Relativity, that gravitation has a big effect on light. Few months later a man named Karl Schwarschild predicted that a thing like a black hole could theoretically, exist.
In 1939 Robert Oppenheimer, the father of the nuclear bomb, and H. Snyder foretold that very massive stars could undergo a dramatic gravitational collapse. This proved that black holes can form in the nature. Stephen Hawking and Roger Penrose then demonstrated that black holes are a generic feature in Einstein’s General theory of relativity, and can not be avoided in some collapsing objects. Their demonstration showed, according to the general relativity, there must be a singularity of infinite density and space-time curvature within the black hole. The man that constructed the concept black hole was John Wheeler in 1969. Now black holes are one of the central dogmas of science.

“In the beginning all black holes are just normal stars with very massive mass, then they run out of nuclear fuel and collapse and become a black hole”-Hawking, A Brief History of Time, 1988.
Black holes begin as stars that are sufficiently massive and compacted that even light does not always escape from them. When the light leaves the stars it is dragged backward back into the star. As the star contracts more, its gravitational field at its surface gets stronger and the light cones get bent inward more. This makes it even more difficult for the light to escape the star, and the light appears to be dimmer and redder to an observer from a distance. When the star has shrunken to a certain critical radius, the gravitational field gets that strong that the light cones are bent inward and the light cannot under any circumstances escape. Thus if light cannot escape, neither can anything else; everything is dragged back by the gravitational field. So one has a set of events, a region of space-time, from which is not possible to escape to reach a distant obsever. This region is what we now call a black hole. Its boundary is called the event horizon and it coincides with the paths of light rays that just fail to escape from the black hole To understand the gravitational field of a black hole, imagine you have a tennis ball in your hand and you are throwing it into the air. The harder you throw the tennis ball the faster it goes and it will go higher into the air before it returns. If you would throw it hard enough it would never return, the gravitational attraction of earth gravitiational field will not be able to pull it back. The velocity (speed) that the ball must have to escape the gravitational field of something is known as the escape velocity.
When a object or a body is crushed into smaller and smaller volume, the gravitatinal attraction increases, and the velocity that the escaping object must have, becomes superior. Eventually a point is reach when light cannot ecsape the massive object and then it is known as a black hole.
The man has found evidence of several black holes in your galaxy. It is impossible to see a black hole directly because no light can escape from them; they are totally black. How can they exist if we do not see them? We can not see magnetic waves and it took man a long time to believe that they existed.
When a very massive star has burnt all its nuclear fule it explodes and turns into a supernova. The substance that is left collapses down to an extremely dense object known as a neutron star. One teaspoonful from a neutron star can weight many million toons. We know that these objects exist because several have been found using radio telescopes. If a neutron star is too large a process begins that can not be intercepted, the gravitational force of the neutron star is so great that the star collapses into itself. Now the neutron star has changed into a thing known as a black hole.


Evidence: Have we found black holes?

A supernova occurs in your glaxy every 300 years and some of these supernovas turn into black holes so there must be some number of black holes in your galaxy. One of the primary evidences that man has found are the observations of the gamma rays that a black hole sends from itself when it consumes particles.
Many scientists believe that there are two main mass ranges for a black hole: Stellar mass black holes that have the mass of a typical star and supermassive black holes
, that have five to ten times more mass than the typical sun/star. Scientists have no pictures of black holes, because they do not transmit light.

If the mass of a black hole gets lower, the higher its temperature gets. If a black hole loses mass, then its temperature and rate of emission increases, so it loses mass very quickly. What happens when the mass of a black hole gets very little, althoug much recsearches, is still a mystery. A resonable guess is that it would disappear completely in a tremendos final burst of emission, this emission would be equal to the explosion of millions of H-bombs.
One medium black hole could run ten large power plants. The only problem is that the man cannot harness its power. One of the biggest mistakes one can make is when one is trying to picture a black hole in ones mind. Many think that black holes are huge objects; this is a very big mistake. Black holes can be huge but there are black holes that have the mass of a mountain compresses into less than a million millionth of an inch, the size of the nucleus of an atom. If you had one of these black holes on the surface of the earth there would be no way to stop it from falling through the floor to the center of the earth.
There is no boundary for the size of a black hole. We expect that black holes were produced by very massive stars and so we expect that the black holes weigh around as much as a very massive star. A typical mass for a normal black hole would be about ten times the mass of the sun, or about 10^(31) kilograms. There can be very small black holes, like said before, and very big black holes, the biggest ones are suspected to way million times as much as the sun, or about 10^(36) kilograms.
The black hole follows the rule about mass and space, if the black hole is very massive it takes very big space. This is proven to be right with the Schwarzschild radius (wich is the radius of the event horizon); the radius of the event horizon and the mass are directly proportional to one another. If one black hole has ten times more mass than another black hole its radius is ten times larger. The typical black hole would have the radius of 30 kilometers.

“In general realativity, gravity os a manifestation of the curvature of spacetime”-Einstein, A Brief History of time, 1987

The laws of unitarity do not apply to black holes. In mathematics and physics, unitarity is the property of an operator (or a matrix) that is unitary. Because of the no hair theroem, we can never find out what went into a black hole, the information to do that is destroyed in the infinity of the black hole. On 21 July 2004 Stephen Hawking developed a new theory that black holes eventually emit information about the things that they swallowed. This is called the Hawking radiation; he thought that the event horizon would allow this information to go through. This theory has never been fully accepted by the scientific community; on the contrary it has got a lot of attention from the media. If this theory is accepted it will solve the information paradox of the black hole.


keep up the good work mar.