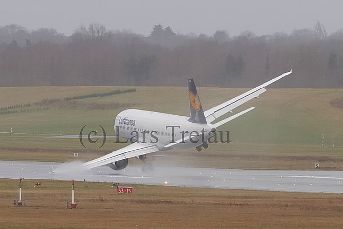 
By now, I’m sure if you’re at all connected to aviation (or the nightly news for that matter) you’ve seen the video of the Lufthansa A320 landing in a crosswind in Hamburg, Germany. The media, once again, seems to be less knowledgeable about aviation than they are about selling advertising because you read headlines such as:

Here’s the problem. This near “Disaster” was not the cause of anything other than the pilot’s inability to control the aircraft. How do I know? I’ve been landing airliners in stronger crosswinds than this for years and yes, even in tropical storms. (Never hurricanes. That’s suicidal in it’s own right.)

How it’s supposed to happen:
http://www.airlineempires.net/blog/wp-content/uploads/2008/03/r-crosswind.jpg


Handling crosswinds in an aircraft is all about understanding vectors. You have to fight the horizontal vector of the crosswind with either a competing vector of your own by flying into the wind enough to remain aligned with the runway, or with a horizontal component of lift created by banking the aircraft into the wind. The first method is easy. If the wind is coming from the right, you turn your nose into it using the wind to keep your aircraft aligned with the runway. This is called a side-slip or a “crab,” and is the most common method for dealing with crosswinds in all phases of flight, except for the touchdown.

And that’s precisely where the second method must be used. This one’s a little more complicated. Since a landing while in a “crab” will put extreme side loads on the landing gear, possibly collapsing them, a pilot must straighten the nose of the aircraft prior to touchdown. This is done with the rudder pedals that control the yaw, or side to side movement of the nose of the aircraft. Left rudder in a right crab will bring the wheels in line with the runway, but there is a catch. You’ve taken away your competing horizontal vector against the wind, and there’s nothing to keep it from blowing you off the runway. So off the runway you shall go…unless you find another way of creating that competing horizontal vector.

This is accomplished by lowering the upwind wing (the right wing, in this instance). Since aircraft lift only ever points straight up (in relation to the aircraft, not the ground), when you bank the wings you are producing a horizontal component of lift, exactly the horizontal vector we need to counter the wind. So, by simultaneously straightening the nose and dipping the right wing, the horizontal component of lift will counter the affects of the crosswind and bring you safely to earth.

Watch this video of a Northwest A319 which demonstrates textbook-perfect technique. Much like the Lufthansa Airbus, this A319 flies a “crab” angle until just prior to touchdown when the pilot inserts left rudder, straightening the nose with the runway. But watch how the Northwest pilot dips the right wing into the wind, thereby preventing any gusts from picking it up, and making a very smooth landing on the right main landing gear, just as it should be.


How it Happened in Hamburg:

So what happened in Hamburg? Exactly as I described above, you see the aircraft flying sideways in a “crab” to counter the wind. The approach looks textbook as the pilot kicks the left rudder to align the nose with the runway, but one thing never happens. The pilot doesn’t lower the right wing. In fact, he seems to raise it. The effect is entirely predictable, and the aircraft veers sharply left, nearly resulting in an infinitely more exciting video for those two amateur videographers.

“But it was a gust of wind the pilots could have never planned for.”

Rubbish. There are gusts of winds all the time, many stronger than the one that pushed this A320 around like a toy. The pilot is (or should be) trained to handle these gusts closed to the runway without damaging the left wing. In fact, most crosswind wing-strikes happen on the upwind wing (the right wing in this case) because the pilot has compensated for the crosswind with more bank than the ground will allow. So why did this happen on the downwind wing? Because the pilot did not dip the right wing as is fundamental in landing an aircraft in crosswinds. How do we know? Had the pilot dipped the right wing like he was supposed to, and gust of wind would have pushed the wing down, not up. The aircraft would still have drifted to the left with the gust, however this would have been easily corrected by adding more horizontal component of lift with more right bank.

Why did the pilot raise the right wing instead of lower it? I’m going to give the pilot the benefit of the doubt that he did not do the exact wrong thing by raising the right wing. More probably, the wing raised itself because the pilot failed to make the necessary right bank correction. Watch the wings as the left rudder is kicked to align the aircraft with the runway. The left turn of the nose causes the left wing to move slower through the air, and the right wing to move faster. This means the right wing will be producing significantly more lift than the left, and it will want to raise. Once the wing raises, the wind catches it, and the almost-mayhem ensues. It takes the pilot several seconds to lower the wing to prevent the aircraft from drifting off of the runway, but the damage was already done.

Notice the difference in outcome of the first example where the Northwest pilot lowers the right wing into wind and has a nice comfortable landing compared to the Hamburg version. The crab angles are nearly identical which indicates comparable wind (to me the NWA crab looks a little more aggressive which would mean they had a stronger crosswind, but I’ll leave that judgment to the reader.)

What seems obvious to us pilots as a botched landing due to poor technique is apparently not so obvious to the general public. The moral of the story is not that pilots lack the technique like the one that made international news with the Hamburg almost-landing, rather that pilots are so skilled that they make landings in stronger crosswinds than this multiple times a day, without videos making it further than flightlevel350.com. And that this wouldn’t have happened if it was a Boeing…