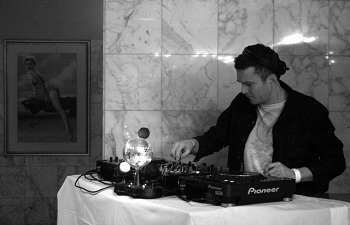 
One year has past since I started Dj'ing and it has been quite busy year. I have enjoyed every minute and met a lot of new good and fun people in the business. But it all comes down to the fans. It wouldnt be possible nor doable if it wasnt for them. They have followed me through every gig and cheered me on when i was in doubt. Respect !

The year started out when Jack Schidt (aka Margeir) and his friends from JonJonson event promotion asked me to fill in a spot because one of their dj's was sick. That was 15 min before midnight on new years eve 2008. I was there before he could hang up the phone and played a nine hour set at Apotekid club/bar. It was so successful I got an interview in the local newspaper. Thanks guys for my first break ! /cheer !

Flex radio show and event promoters hosted a bedroom Dj competition which I took first place. It was a close call until the last minutes. Part of the price was to perform live on their show on radio Xid. This was in Febuary.

In March me, BenSol, created a clubnight with two other dj's. The famous CasaNova who is well known for his techno/minimal grooves in the local bars/clubs/parties. The huggable furry bear DiddiLuv was the 3rd and we named our night TraeAngular. Our first night was helt at Dillon with great success.

HugarAstand (t: StateOfMind) brothers decided to hire me as a warmup dj for their Bday tour. It was a 10 year old bday for them. Successfull years as the top two underground djs here on the island. Was a great honor for me when I was invited to do this. Fyrst bday event was in Akureyri at Sjallinn in the end of April.

End of May the final HugarAstand bday party was helt at ClubJacobsen both floors. This was without a doubt the best underground club night of the year. I thank them for giving me this opportunity.

Midsummer and it was time for another TraeAngular night. It was 13th of June in Club Jacobsen on both floors. I still hear people playing the recordings from this night in parties all over town. That makes me very happy :)
Fun fact: GusGus-AddThisSong was played and recored first time in a club or in a set here.

NoRequest radio show in Akureyri invited me to be the main DJ 16th of July. /wave to all the cool people there :)

Beginning of August I organized a scene on the famous GayPride Parade. The BenSol truck entered the parade packed with soundsystem and happy dancing people with me playing House music. Over 80.000 poeple were there watching, listening and dancing o0 !
Our truck made the news, Channel one and two and two newspapers. This was so much fun and a cause worth fighting/playing for.

PartyZone, the nation‘s dance show, heard about that I was accpted to perform at Airwaves Music Festival so they asked me to play at their show and give poeple a litle taste how i would sound at Airwaves. This was 10th of september.

Airwaves 2009, our biggest and greatest music festival started 14th of October and ended the 18th. I played 2 hour set there and CasaNova and DjFrimann (HugarAstand) right after me!. After reading the reviews we couldnt be happier. Our night got two thumbs up !!

TraeAngular #3 was on ClubJacobsen both floors and was an epic night ofcourse =) BenSol, CasaNova and DiddiLuv enjoyed themselves and others 6th of November.

X-mas time in Reykjavik City and Jack Schidt invites me to join their x-mas festival JolJolsson at Broadway 18th of december. In 4 dancefloor venue, lots of bands and lots of djs. This was great fun and nice to see all those artist come together at one place. Hugs and Kisses to JonJonsson Event Promotions.

Last night of the year ! TraeAngular and HugarAstand teamed up togather with OliOfur and organized an awesome NYE party. Six top dj's on both floors, from midnight til dawn (there is no dawn in Iceland in wintertime ;) )
It was a cool way to end this year with a bo0om.


This was all the main events i played at 2009 and was a really good year for me. There were tons of little bday parties and events i played at also, plus i followed CasaNova around as a groupie and played with him in few places unoffically, like KaffiBarinn for instance.

Recordings of most of those nights are available undir Discussion button on Facebook.

I have a great respect for the BenSol.