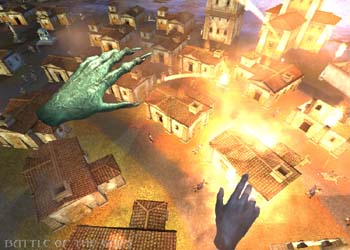 Battle of the Gods :

About Black&White 2: Battle of the Gods

Lionhead Studios is delighted to announce that work is now underway on Battle of The Gods an expansion disk for Black & White 2 which will be published by Electronic Arts.

The graves of the Aztec army covered the lands, but one band of survivors would not accept the defeat, the death of their nation. Over many months they built Totems. Shrines to the thousands of slain Aztec warriors. Then, slowly, they started pulling the bodies from the ground. They dragged them to the Totems and sacrificed them, chanting mindlessly to the skies. For a long time nothing happened. The survivors dug and pulled and dragged and hundreds of bodies went into the Totems. Yet nothing happened. As every believer knows, sacrifices must be living to bring forth a response.

Then the incredible happened. As more bodies piled into the Totems, without warning the sky split with a flash. The accumulated dead had been enough and a god had been summoned. Born of an army of the slain, this was no ordinary god. This was a god never seen before. For the first time in this world there was a god of the Undead. And the ground began to shake. This Aztec deity was raising an entire corpse army. Death was coming to the world on a massive scale.

You’ve conquered Eden and its tribes but in Battle of The Gods you return to Eden to find an even more powerful foe – a rival god who is determined to convert your subjects and become the ruler of Eden .

Battle of The Gods will features a brand new creature, two new lands and four new miracles . There will also be six new challenges and other new content.

Now it’s god versus god and only one can reign supreme.

Battle of The Gods, the expansion disk for Black & White 2 is being developed by Lionhead Studios and will be published early Spring. Exact release date and price details will be announced later.