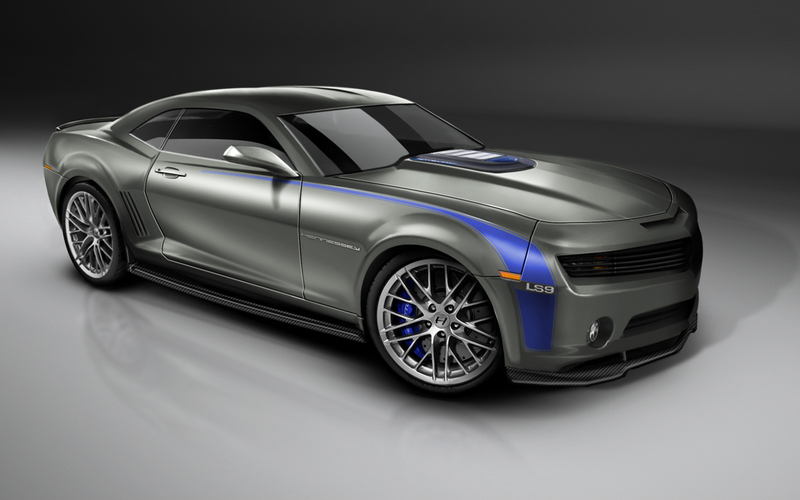 Following in the footsteps of such legendary Camaro tuners as Yenko Chevrolet, Hennessey Performance Engineering has unveiled the HPE700, which mates a standard 2010 Camaro SS with the supercharged LS9 V8 from the Corvette ZR1. As if that engine alone weren't enough, HPE has tuned the LS9 to produce 705 hp and 717 lb-ft torque. That should make for an awesome pavement pounder in the quarter-mile, or else a neat way to scorch the earth and create mushroom clouds of tire smoke.

Other performance goodies include 15-inch carbon ceramic brakes cribbed from the ZR1, upgraded suspension bits and HRE alloy rims shod with Michelin PS2 rubber. HPE chose not to leave well enough alone in the looks department, either. The HPE700 has inherited the controversial see-through hood from the ZR1, along with a body package that includes a full carbon fiber ground effects kit and a unique front fascia with faux-hideaway headlights and a billet aluminum grille. We like it, you may not.

The HPE700 is a lot of car, and to help drivers reign it in, a 1-day performance driving course is included in the asking price of $109,500. The first orders will be accepted next week to registered bidders at the Barret-Jackson auction in Scottsdale, AZ with regular orders being taken the following week. See the rest of Hennessey's official details in the press release after the jump.

At the heart of the beast is GM's new LS9 supercharged V8 tweaked as only HPE could to 705 horsepower and 717 lb-ft torque. To qualify as a supercar under the HPE banner it can't just go, it has to whoa. With optional 15 inch carbon brakes from the stunning new Corvette ZR1, light weight HRE wheels with Michelin PS2 tires and full suspension upgrades the HPE700 Camaro will be able to make full use of its new found power.

“The HPE700 Camaro allows our customers to combine supercar power and performance with classic American muscle car looks in a modern, daily-drive usable sportscar with a backseat and a trunk!,” said John Hennessey, President and CEO of Hennessey Performance Engineering. "We will be announcing other Hennessey turnkey vehicle packages for the 2010 Camaro in the near future along with an extensive list of aftermarket performance parts and accessories. But for now, the LS9-powered HPE700 Camaro, replete with ZR1 inspired looks and performance promises to be at the top of the American muscle car food chain later in 2009.

Hennessey is offering the first HPE700 Camaros exclusively to registered bidders at the 2009 Barrett-Jackson auction in Scottsdale, AZ. Orders can be placed at the Hennessey display at the show or by phone or email beginning Tuesday, January 13 through Sunday, January 18, 2009. On Monday, January 19, 2009 the HPE700 Camaro will be available to the general public and can be ordered from select Chevrolet dealers as well as directly from Hennessey Performance Engineering.