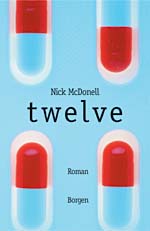 The book that I decided to write about is called Twelve. Twelve is written by Nick McDonell who was only seventeen when he wrote it. Nick McDonell was born in Manhattan on February 18, 1984.
He wrote the novel Twelve in 2002, when he was 17 years old. The book I would say is a novel and the subject of the novel is drug addiction among wealthy Manhattan teenagers. The publication of McDonell's novel at such a young age was the subject of many articles in high-profile publications such the New Yorker and Entertainment Weekly. McDonell's book deal came out of a family connection - his uncle who was a senior editor at a publishing house.

The book takes place over a period of five days in December 2002. The main character in the book is called White Mike. He is called White Mike because he is so pale. White Mike is a 17 year old drug dealer. He quit school so he could sell drugs, he was a very smart student though and he does not take drugs himself. Although he is really pale, people think he is quite handsome. The book is called Twelve because White Mike is selling a new drug that is called Twelve and is more addictive than other drugs. There are many characters in the book but no other main character, they are all equally important. One of them though is named Claude, he is the brother of Chris who is also a character in the book. Claude is pretty weird. He often goes downtown with his friend Tobias and stops in sword shops and buys weapons and stuff and keeps them in his room. He is a few years older then Mike.
The book begins with White Mike and tells his story about how he deals and his childhood and often when a new chapter begins then a new character is introduced and they all connect somehow. For instance White Mike knows this girl named Molly who meets Tobias who is friends with Claude who is Chris´ brother who knows a girl named Sara who knows a boy called Andrew who has two friends that buy drugs from White Mike. It all seems very complicated but little by little as the story goes along you will find out how all the characters connect with each other.

I found the book rather unusual which was a good thing, something about it made me want to keep on reading it. It is different from all the other books I have read. Each chapter was very short and the shortest one was only one sentence! In each chapter there was a short but detailed story about one or two of the characters. The scenes are only briefly described, with much created in the readers mind, and the ending was both shocking and surprising
The first page reads: “Can we please all stand and have a moment of silence for those students who died. And can we now have a moment of silence for those students who killed them.”
I'm a winner, I'm a sinner. Do you want my autograph?
unholywarrior fyrir 14 árum, 5 mánuðum